Home » Blog » Chicago: The Collide of Youth and Baby-Boomers

One of my all-time favorite books is Erma Bombeck’s 1991 bestseller When You Look Like Your Passport Photo, It’s Time to Go Home!”  Since 1992, I have framed funny travel stories in my mind and often thought of journaling them. “You can’t make this up!” is the phrase I have often used to describe these episodes. Here is one I find particularly funny. 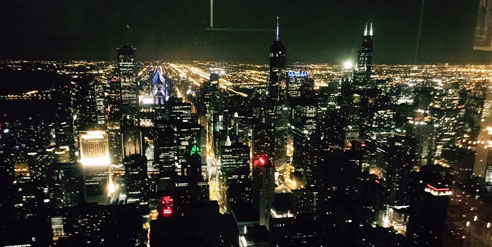 It was midnight. We climbed the narrow, dark stairs of the basement dance club in the heart of where it’s happening in Chicago, Rush Street. The street was well lit and filled with the noise of people having fun. It was Friday night in Chicago. Parked along the curb outside the dance club was a white stretch limo. No ordinary limo, this had double axis wheels in its center, 2 sunroofs and an outdoor rumble seat in the rear. It was an eight wheeled limo; I had never seen one so long. As we took in the sight of this long stretch, out popped a few young men. We quickly learned it was the best buddies’ 21st birthday. “Where ya going?” asked one of the young men. “The Drake” replied my husband. “The Drink!” they exclaimed,” that’s where we’re going – get in, we’ll take you!”

Chicago’s “Rush Street” is a vibe, not a street. Located in the downtown area, Rush Street runs between the Chicago River and Wabash Avenue, parallel to Miracle Mile (Michigan Avenue), Chicago’s shopping mecca. It is home to dozens of restaurants, cafés and eateries, a popular spot with a vibrant, energetic buzz.

My husband’s grin was shouting “why not” so we quickly hopped in the rumble seat as the birthday party amassed itself and poured itself into the limo. The limo pulled away from the curb and I sat in the back feeling like a pageant queen, daring myself to wave. The limo drove north on Rush street, the Drake was east. Then the limo turned left, the Drake was to the right. Then the limo picked up speed.  As we barreled down a four lane street away from downtown Chicago, out popped a partygoer through the sunroof. “Are you having a good time?” Immediately my husband I leaned forward and in unison shouted, “Where the heck are we going?” “The Drink”, he replied.

The Drake – The Drink. Who knew two so completely different places could sound so similar? And why would this group of young millennials want us to join them? The Drink is a Westside, hard-rock, warehouse-style night club. The Drake is an elegant and sophisticated five-star hotel. The only similarity is in their name. The limo arrived at the Drink. We whispered to the driver not to leave and went inside to join in the celebration. We bought a round of Peach Schnapps and toasted to the “birthday boy.” No judgements of age, taste, or preference were exchanged; simply an appreciation that celebrations are inclusive ways to bring people together. My sense is that we need to keep celebrating.